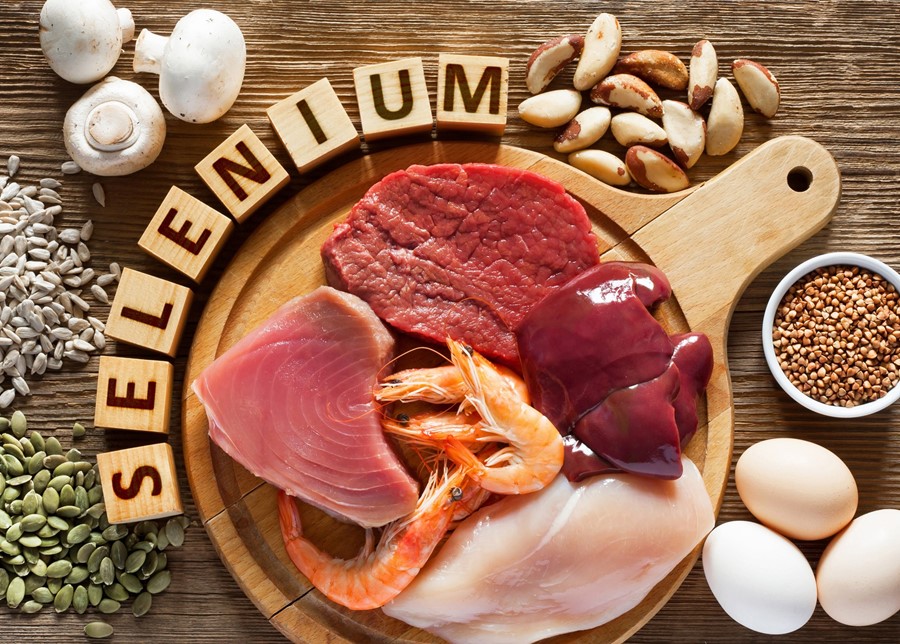 Selenium is a vital trace element , which is part of numerous enzymes and thus participates in a multitude of reactions in the body. Among other things, it is important for a functioning immune system, healthy hair and nails, the formation of thyroid hormones and sperm and the protection of the organism against cell damage caused by free radicals. Since selenium cannot be formed in the body itself, a sufficient selenium intake through food or dietary supplements is essential. You can find out everything about the trace element and which forms of selenium in dietary supplements are the best choice in our blog post.

How much selenium should I consume daily?

Since 2015, the German Nutrition Society (DGE) has given specific estimated values ​​for an appropriate intake (reference value) in the individual age groups, so there are no more ranges.

The reference values increase with age. In adolescents aged 15 and over and adults, the values ​​differ according to gender. For men the reference value for the intake of selenium is 70 µg per day, for women 60 µg daily. A higher reference value of 75 µg per day is given for breastfeeding women. Pregnant women have no additional selenium requirement.

Those who use organic products are generally better supplied with selenium. Because with organic products, fertilizers containing sulfur must not be used and therefore sulfur is not absorbed by the plants instead of the trace element.

Important: The Brazil nut, which comes from South America, has a particularly high selenium content. Because the Brazil nut tree has a very fine network of roots, which makes the absorption of nutrients from the soil particularly efficient. But be careful, radium is also deposited in the Brazil nut. You shouldn’t overeat these nuts because of their natural radioactivity. The Federal Office for Radiation Protection recommends a maximum of 2 Brazil nuts per day .

What happens if there is a lack of selenium?

A Selenium deficiency leads, among other things, to disorders of the immune system, sperm production and restrictions in muscle function.

A dietary supplement can be particularly beneficial in the case of eating disorders and diseases that reduce nutrient absorption in the intestine be useful for dialysis patients or a one-sided diet. Studies also show that Hashimoto’s thyroiditis taking selenium supplements in doses of 200-300 μg daily can alleviate the inflammatory reactions in the thyroid gland. In such cases, it is best to always consult the attending physician.

What happens if I take in too much selenium?

Anyone who takes in excessive amounts of selenium (possible from around 300 µg daily) over a longer period of time, can develop what is known as selenosis , which has serious side effects. The side effects range from neurological disorders, fatigue, joint pain and gastrointestinal problems to hair loss and impaired nail formation. Selenosis is often difficult to diagnose because the symptoms mentioned are very unspecific. Only breath that smells of garlic can be an indication, as selenium is exhaled in the form of methyl and dimethyl selenide when it is consumed very high. Acute poisoning (several grams a day) can lead to heart failure and thus death.

Selenium is found in food especially as selenocysteine ​​ and selenomethionine . The former is mainly found in animal foods, the latter in vegetable foods. Selenocysteine ​​is the biologically active form of selenium and is converted into selenium-containing proteins (the so-called selenoproteins) built in. The best-known selenoprotein is glutathione peroxidase, which plays an important role in protecting cell membranes from free radicals. In contrast to this, selenium methionine, instead of methionine, is non-specifically incorporated into proteins without having any function. Selenium methionine is therefore regarded as a selenium storage form .

Sodium selenite , in contrast to the two forms mentioned, is not bound to amino acids. It is therefore absorbed by the body particularly quickly, can be incorporated directly into selenoproteins and unfold its effect. Excess sodium selenite can easily be broken down and excreted via the respiratory tract or the kidneys. There is therefore no risk of too much selenium accumulating in the organism.

A combination of the two forms sodium selenite and selenium methionine is particularly advantageous, such as in our selenium tablets . On the one hand, you are supplied directly with the trace element, and on the other hand, sufficient selenium is available to you over a longer period of time. In addition, a combination leads to a particularly high bioavailability. Here you can find our product.